Frankfurt’s IFFA event gave a taste of what’s to come for foodpro 2023. We speak to foodpro’s Key Account Manager, Abigail, on the latest food industry trends for 2022 and beyond.

“I went over there and ate for Australia,” Abigail says of her trip to IFFA, joining more than 50,000 meat industry professionals from 129 countries gathered in Frankfurt. “I sampled everything on offer, and it was delicious. The Germans clearly love their meat.”

As foodpro’s Key Account Manager, Abigail networked with the world’s biggest players in processing, packaging, and selling meat, ensuring these innovative global companies will set up stands at the next foodpro, Australia’s largest industry event at the Melbourne Exhibition and Convention Centre on July 23-26, 2023. Abigail said automation and digitisation were big themes at IFFA, along with innovations designed to boost energy efficiency and save resources.

Plant-based trends on the rise

The most obvious new trend at IFFA was the inclusion of plant-based proteins for the first time – a major break in tradition for Europe’s biggest meat event. More than one in five IFFA stands presented products for this growing plant-protein sector, and Abigail was impressed by the quality.

“Meat was a given when I was growing up,” says Abigail. “My grandparents had a large cattle and lamb station in central Australia, and when I was a kid, we were always up there mustering and butchering meat. “So I have to admit to being fairly cynical about plant-based protein. How could it possibly be as good as meat? But I was stunned by the flavour and texture. There were times that I felt like I was actually eating meat.”

Abigail said the trend was not against the enjoyment of quality meat, but towards more conscious consumption. She said the move towards “flexitarian” eating in Australia was reflected in Frankfurt. Plants, insects and cultivated meat were all represented at IFFA, and plant-based protein featured in many of the demonstrations and seminars.

Another newcomer to IFFA was Cantek, a Middle Eastern company selling mobile machinery for more humane processing of halal and kosher meat. Cantek’s team were delighted to sell their display machinery on day one of the event, and they look forward to introducing their system to foodpro in Melbourne next year. Abigail noticed many of the international brands at IFFA were keen to expand into Australia, and their teams were looking forward to the next foodpro event.

Michael from Heinen and Abigail Ford making plans for foodpro 2023.

She also saw major investment in stands by companies participating at IFFA. While visiting the event, Abigail met with IFFA’s director Johannes Schmid-Wiedersheim, gaining invaluable insights on how the industry dealt with COVID-19, among other challenges.

“There was a lot of collaboration, which created an amazing atmosphere,” Abigail said. “Companies have invested huge amounts to welcome customers to their stands and build stronger relationships. There was a real sense of celebration to be networking in person again.”

New atmosphere in the food industry

Abigail said many of the stands were two storey complexes, with private networking zones upstairs, and dedicated café/bar space. Companies went out of their way to cater for potential buyers, with full restaurant service and drinks to match.

“The atmosphere was electric at IFFA,” Abigail said. “This is due to companies investing generously on stand spending, by serving food and drinks on their stands, as they realise the value of encouraging major buyers to want to spend time with them and build stronger relationships.”

Companies went out of their way to cater for potential buyers, with full restaurant service and drinks to match. “And the parties went well into the night,” Abigail said. “You could tell people went to a lot of effort, and the customers really appreciated it.” Abigail said Vemag’s celebrations at IFFA were going strong until 2am, with a quirky 1950s caravan serving food and drinks.

She was also impressed by the Multivac stand, staffed by waiters and chefs producing beautifully cooked and presented food. Zaltech’s stand was also a “constant buzz”, with a real spirit of hospitality driving their event campaign. Marel, Poly-Clip, Ulma, GEA, CPS and Thompsons Meat Machinery were also impressive.

“IFFA was inspiring,” Abigail said. “It’s great timing for foodpro, as many of the really new ideas in Frankfurt will still be celebrated and relevant at foodpro next year.”

For more information about foodpro 2023, get in touch with our team here to find out more. 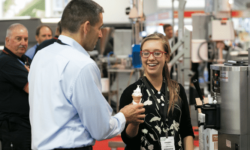 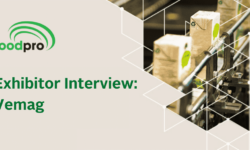